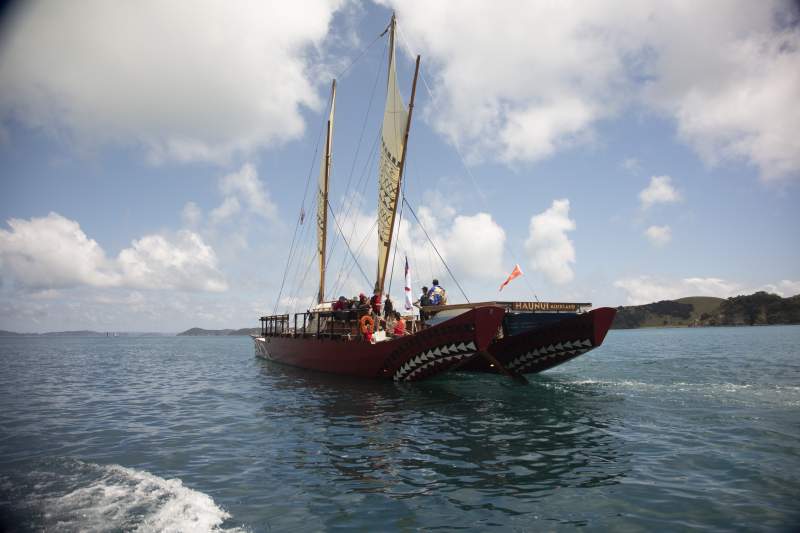 Te Hau Kōmaru national waka hourua festival runs from May 19-23 with school and public interactive events on the 20-21 May held at the Tauranga Bridge Marina, 101 Te Awanui Drive, Harbour Bridge Marina. There will also be an open public day on May 22. There will be book launches and the debut of a waiata and video from IA Maori Music, and Tauranga Library events.

Te Hau Kōmaru current board is an interim board of Waka Hourua experts charged with forming a national waka hourua strategy, establishing a national entity, and organising supporting events. The board was formed in response to Prime Minister Jacinda Ardern’s commitment to support the continued development of waka kaupapa and voyaging throughout Aotearoa.

Hinemoana then sailed to Mohua Golden Bay and onto Porirua where they are being hosted by Ngāti Toa Rangatira at Hongoeka Marae.

Hinemoana and her crew will then sail on May 5 to Ahuriri-Napier, and then onto Turanganui a Kiwa-Gisborne, where she will be joined by Tai Rawhiti Waka to sail to Mōtītī Island where they will be met by Haunui Waka (from Tamaki Makaurau-Auckland) and Ngahiraka Mai Tawhiti Waka (from Tauranga).

The fleet will then sail to Tauranga Moana, where they will be welcomed by the Waka Taua Tākitimu and local waka tangata.